To the supporters those who donated to the Campaign,

The campaign was very impressive and managed by individual contribution and volunteer support, an exemplary work, its an successful event where family members, activists, civil society actors, photographers, diplomats, donors and embassies presented with keen interest and solidarity. The campaign team would like to thank every individual contribution and solidarity fund to the event for a noble cause to raise voice for truth and justice in Nepal.(NEFAD)

Posted by Campaign for missing persons in Nepal at 03:48 No comments:


The 10th December,
THANKS TO YOUR HELP,
NEFAD was able to host 30 families from several districts, whose representatives raised concerns and needs in front of international actors and decision makers.
A photo exhibition was set up as well as a memory gallery, which included items of disappeared persons.
Please view our photo gallery. 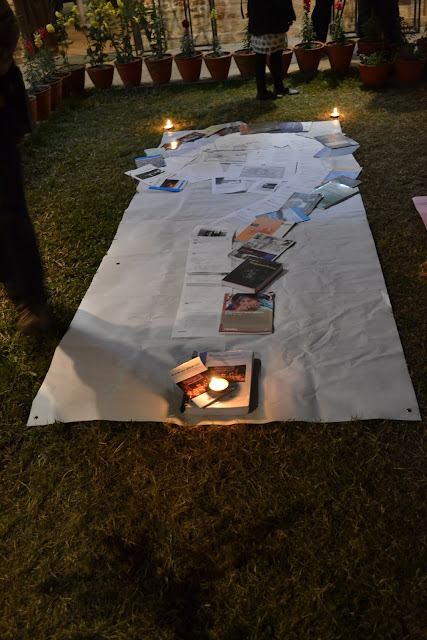 Posted by Campaign for missing persons in Nepal at 01:26 No comments:


We are currently raising public awareness with graffiti and posters pasted on the most trafficked street’s corners.
Please visit our Gallery!

Posted by Campaign for missing persons in Nepal at 01:24 No comments:

We cannot promise you that a contribution to this initiative will ensure that families will finally learn the truth about their loved ones. However, we can promise you that your money will go to a good and truly noble cause as trying to make families who suffered the enforced disappearance of a loved one not to be  NO MORE INVISIBLE


Posted by Campaign for missing persons in Nepal at 10:12 No comments:


The 1996-2006 conflict in Nepal brought tragedy for many families: thousands of people were killed during the conflict, and over a thousand families still do not know what happened to a relative. To date the government of Nepal has not provided families with answers that will end the agony of uncertainty, so that they can mourn the loss of a beloved husband, caring father, or loving son or daughter.

According to ICRC there are more than a thousand missing persons in the country, and since 2007 only 42 families have received an answer and have been able to move on with their lives.
While facing the emotional struggle of not knowing whether their beloved is dead or alive, families have to simultaneously cope with socio-economic factors which are putting them on their knees.


During the course of the ten year conflict enforced disappearance became the tragic fate of thousands of citizens. Mothers of the disappeared started challenging the state, raising their voices against impunity and leading the families’ movement throughout different regions of the country during the conflict period time.

The mothers of the disappeared began an inspiring nation’s journey from an individual complaint to today’s collective activism. Some of those mothers who initiated the movement have since passed away but some are still alive, elderly, still waiting for truth and justice to address their grievances.

Not only mothers are at the center of the struggle but also wives, sons and daughters of missing persons. Many children have remained orphaned, or raised by a single parent in a context of stigmatisation.


Their quest for certainty about the fates of their relatives and efforts to hold those responsible to account has brought little or no satisfaction. It is therefore essential that their stories be told, so that we can raise awareness in society and raise pressure on authorities to carry out prompt and thorough investigations. In order to this, Raising the Voices of the Invisibles wishes to launch a public awareness campaign.
Posted by Campaign for missing persons in Nepal at 04:00 No comments:

Campaign for missing persons in Nepal